One of Coddington's four listed domestic buildings. The Laurels on the corner of The Green and Main Street is a handsome late 18th century building with a gated entrance. 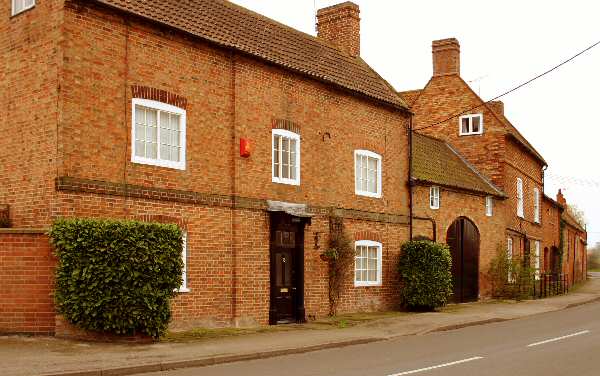 In 1863 this was part of the farm/maltings complex with cottages bought by James Thorpe from Edward Chivers Bower of Tickhill Castle York for £11,500. In the 1918 Estate Sale it became:

At that time the Laurels was described as 'a messuage with a back kitchen and washhouse and piece of land used as a garden occupied by John Roberts as undertenant to John Fryer'. The main house, had 2 back kitchens, yard and gig house. The complex included a maltkiln and offices, stables, granary warehouse and orchard and cottage.

In 1861 on Census night John Fryer had 9 people (4 family members and 5 servants or farm workers) living in the farm, with John Birkett living the cottage beyond the Maltings(now part of Cherry Tree Cottage). The following 6 people were living in the Laurels:

By 1871 the Weightmans were the farmers in the main house with a household of 17 (13 family members and 4 servants) on Census night whilst the Birkets and son William were still in the cottage. A retired farmer had moved into the Laurels with her young daughter:

In 1881 George Ross, aged 36, was the farmer in the main house with a household of 6 family members and 2 servants. The Stansfields occupied the Laurels and John Birkett the cottage. Mrs Stansfield died sometime after 1881, but her unmarried daughter remained at the Laurels for a long time.

In the 1918 Estate Sale, Miss Stanfield bought her home for ?200. It was described in the Sale catalogue as:

This house is numbered no 43 and contains: Front entrance, front sitting room, living room, 7 bedrooms, attics or store rooms, kitchen, dairy and pantry. On the frontage a carriagr house, between which and the house is a covered passage way leading to the back and a large brew house now used for coals. There is a useful garden. The tenants are Miss Stanfield and Mr G and Mr GA Ross.

Miss A P Stanfield continued to live in Coddington, until at least 1928 and probably died in 1932 aged 71. We have a gravestone inscription recorded for Coddington churchyard which fits her and her father: John Parkin Stanifield, died 26 April 1898 aged 79 also Ann Parkin dau died 16 Non 1932 aged 71. If this is true we don't know where John P Stanfield was on Census nights in 1871 and 1881.

In the later 20th century, trade directories record the following inhabitants at the Laurels:

Mary Hollidge taught about 40 children at the Wesleyan School (probably from 1858 and perhaps during the difficult time after educational reform in 1870, however by 1879 the teacher was Mary Taylor).