Development of the National School 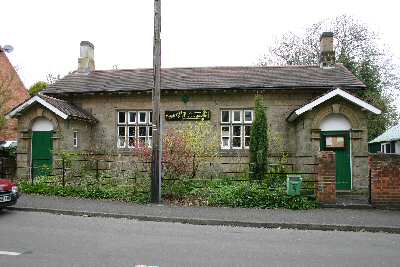 This article is about the development of Church of England schooling in Coddington. The old (National) School, on Brownlow's Hill is now used as the scout hall.

In the early 19th century Coddington had a schoolmistress who taught reading and sewing and was given 3 or 4s /week to teach 12 boys and girls of the parish from the income of Joseph Birch's local charity. In 1827 a master who also taught writing replaced her. The National school was built in 1846 and head teacher Edward Unwin was appointed. In 1844, 1848 and in 1850 trade directory John Squires was listed under "Boy's School". 1853 the National school attendance was listed as 70 in Whites trade directory - Edward Unwin the schoolmaster.

By 1857 the married teachers John and Sarah Roberts from Cheshire were running the National School. Rev Frederick Taverner's map showed the Roberts to be living two doors up from the school towards Balderton Lane. The 1869 Morris Co Trade Directory says that in 1866 a National School was built on the site of the old one, but this could be a mistake since there are no other references to this.

In 1872 trade directory John Robert is described as schoolmaster and collector of rates. In 1872 Coddington School became a National School as a result of Forster's Education Act.

John Roberts was certificated as master, Sarah Roberts was demoted to Sewing Mistress and John Pilgrim (possibly the same one who was Coddington enumerator in the 1901 census) became the assistant. The school was subjected to regular inspections - funding depended partly upon attendance figures and partly upon results in inspections and testing of the "3Rs". 10% Funding cuts were used to punish perceived poor performances.

Sarah Roberts became ill and was forced to resign in 1878. She died in 1882 and the school attended her funeral. After her replacement Mrs Else proved unsuitable the Roberts' daughter Mary Walster was appointed as the sewing mistress. After many years of criticism (whether justified or not), Mr Roberts was asked to resign in 1883  and his daughter Mary also lost her job as sewing mistress.

At the time of the 1881 census Mary Walster, her husband (Caunton-born carpenter George Walster) and their first three children were living with her parents the Roberts. George and Mary went on to have a total of 13 children, all but one of whom married and left descendents. John Roberts, died in July 1888 and was buried in the churchyard - it seems a pity that the school log book makes no mention of any school event to mark the occasion.

The new head teacher appointed in 1883 was Joseph Chauntry Hunt aged 23, whose grandmother Ann Chantry had married William Hunt of Coddington in 1824. Joseph Hunt was a disciplinarian, but had great energy and many new ideas for the school. The inspectors who had instigated his appointment rated him more favourably than poor John Roberts and he received a guaranteed salary of £75/year. However the school still suffered poor attendance at times due to the demands of agriculture:- turnip-singling, hay-making, potato-picking, driving game birds for shooting parties. There was always a month's school holiday in August for harvesting, but even so attendances were often low just before or after this time.

From time to time there were also epidemics of measles, scarlet fever, influenza and whooping cough and colds. In 1882, 1889, 1897 and 1900 there were scarlet fever outbreaks. In 1891 when typhoid fever visited Coddington many members of the Levick family were seriously ill, and two died. In 1897 a measles epidemic left 76 cases of measles in school and shut the school for 3 weeks.

From the school logbook we have lists of children:

The children's families had to pay a sum for each child  (2d per child per week in 1879), but were sometimes given partial refunds by the school managers if their children achieved passes in 3 subjects or had very good attendance records. Children from other parishes like Langford were often charged more to attend Coddington school. From 1880 school attendance was compulsory until a child earned a certificate of proficiency, and attendance officers began to visit the parents of "truants". Some parents resented this, particularly if the children were older and the family needed them to look after siblings or earn money. Whilst the Wesleyan School was open, parents in dispute with either school could threaten to transfer their children to the other one. From 1890 schooling was made free to parents.

By 1885 the income from Charity Farm was still subsidising education in Coddington: the whole was raising £126 110s 6d, £50 of which went to the National School and £20 to the Wesleyan school.

There was much turnover in the post of sewing mistress/assistant mistress from 1875 to 1900:

In 1887 another classroom was built during the month long Harvest Holiday. It measured 14ft long, 12ft wide and 10ft high. At this time attendances averaged 55 -65 (roughly twice as many boys as girls) and Chauntry Hunt set himself an attendance target of 75. He promised the children a school holiday when the target was met, but conveniently forget this later. 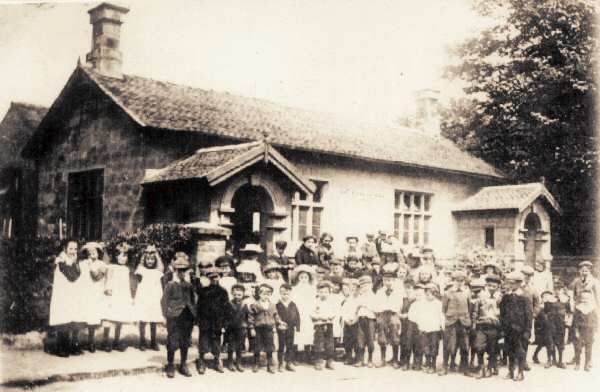 1893 the school inspectors reported excellent work but that the school had become overcrowded with younger children and required larger premises. The state of repair and lighting was bad and there were no cloak-rooms or playground. A new schoolroom 39 by18ft was brought into use, and equipment improved that year - new slates for class 1, exercise books and pencils, an easel, two new blackboards. In 1895 a new gallery was created in the infants' room - it turned out to be a mixed blessing and was removed 14 years later. The Wesleyan school gave up the struggle to survive, closing at the end of April 1895.

Joseph's wife died in 1948. Their son Ronald continued at Old Vicarage, never married and became rather eccentric. Joseph, Mary Ronald are buried in Coddington churchyard. His son Wilfred became an engineer, travelled abroad, became a grandparent and in 1977 was living in Wolverhampton.

The school teaching staff for 1897-8 was Mr Hunt, assistant Harriet Farmer, and two monitoresses Harriet Booth and Elizabeth Gomer. In 1900 Joseph married a teacher from Barnby (with Christian names Mary Elizabeth). His health broke down in 1906, when Harriet Farmer ran the school for two months, but he recovered from nervous exhaustion and returned. Joseph and his wife had two sons; they lived in the house opposite the church, called "Old Vicarage". He retired from teaching in 1925 and died in 1938.

In December 1887 the Third Annual Children's Concert raised 50 shillings for the school prize fund. In 1889 the 5th concert raised £3 3s and the programme was so popular it was repeated on a second evening. The logbook contains the programme for the 1893 Annual Children's Concert, and we can read some program items and the performers' names. In July 1890 Mr Woodrow of Nottingham came to take a school photograph. We have a later but undated school photo.

Elizabeth Gomer, monitoress in 1897 became a teacher. She was the daughter of the butler at Coddington Hall (in the period 1891 until at least 1900) and lived at Almond Cottage on Newark Rd. She taught 7-10 year olds at Coddington School until she retired in 1950.  A pupil of 1946 said "She was very strict and we had to sit still and chant tables etc. We did a little sewing, making handkerchiefs out of cloth flour bags, decorating them with cross stitch." Her nickname was "Prodder Gomer". She does not appear in the graveyard index for Coddington Church but by 1957 she was no longer listed in Coddington trade directories.

From 1925 John Fordham became the school headmaster. He supervised the move from the 1846 building to the new premises, which opened in 1964. The "New School" is at the bottom of Brownlow's Hill, opposite the village sign and the entrance to Newark road.