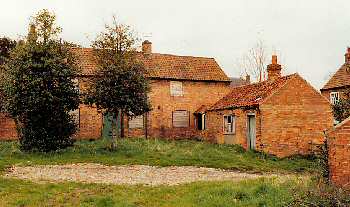 The farmhouse of Charity Farm (now a private house) is right in the centre of the village, next to the Church. The graveyard has been extended over the orchards of the former farm. The site of the farm forms a raised open green area lying in the curve of Main St. Along Chapel Lane there is a limestone wall surviving from a former outbuilding - a remnant of Coddington's stone quarrying industry.

See an article about limestone quarrying and lime burning in Coddington.

In 1738 Joseph Birch left to the the poor of Coddington a farm of 98 2r 8p - Charity Farm. (Robert Brown also left 14 acres in Coddington in trust for Newark's poor.) The 1760 Enclosure Award allotted 86 acres to John Ashwell and John Cooper "in trust for the poor" - who paid the costs of its enclosure of £44 17s 5d 3 farthing. The lands allotted were:

8a 3r was let out as allotments, a rood each to poor families.

In 1832 the land was let for £140/year and was the source of the money available to teach poor village schoolchildren, to relieve the poor, and later for building the almshouses. In 1844 4s a week was used to pay for free schooling for 12 poor children. In the mid 1860s Nicholas Harvey was farming jost of it, at a rent of £188/year.

The large Walster family (descendants of George Walster and Mary Roberts, the schoolmaster's daughter) ran Charity Farm in the C20th. The land they farmed was a long way away, down Drove Lane and Stapleford Lane.

In 1912 George Walster, who was to be Church sexton for almost 30 years was head of the family of 12 sons and daughters. In the Estate Sale of 1918 the Walster family bought lot 24 (7a of accommodation land, grass and orchard next to the Old Vicarage fronting Beckingham Rd for £630) and Lot 58 (the cottage that would one day become Manor Dairy Farmhouse for £100). By 1923 George's holding was more than 150a. George Snr died in 1934.

By 1938 the youngest son Harry was farming, George Roland having retired. By 1961 Harry was still farming Charity Farm and George Roland was living at Enfin, Newark Road (the former laundry of Coddington Hall).

There is much more about the Walster family in the People/Family section of the website.