Limestone quarrying has been an important industry in Coddington in the past.  The main formation is known as the ‘keuper marls’.  Gypsum (sulphate of lime) can be found in the upper section and has been worked commercially at Beacon Hill between Newark and Coddington.  Evidence of the extent of interest shown in this geology is recorded in a report of a visit, in 1899, of the Geological section of the Nottingham Natural Science Rambling Club.  The report was published in the Nottingham Journal on 28th August 1899.

Consequently, limeburning had been an significant cottage industry up to beginning of the 20th century and can be demonstrated by a very early newspaper advertisment referring to the trade in lime placed by a number of suppliers around Newark.

The under-signed PROPRIETORS of LIME-KILNS at NEWARK, CODDINGTON, and LANGFORD, beg Leave to inform their respective Friends and the Public in general, that the Price of Lime at their Kilns for the ensuing season will be three Shillings and three-pence per Quarter, on Credit till Christmas in the present Year; but if it is paid for within one Month from the Day of Delivery, they allow a Discount of three-pence per Quarter: Each Quarter contains no Strike.  All Lime amounting to a less Sum than twenty Shillings must be paid for at the Time of Delivery.  Great Losses having been sustained by Farmers’ Servants taking away Lime from the Kilns in the Absence of the Lime Burners, during the Night Time, the Under-signed have agreed that no Lime shall in future be permitted to be taken in that Manner; but, to accommodate the Public to the utmost possible Extent, the Lime Burners shall attend at the Kilns, during the Season, from two o’Clock in the Morning till eight o’Clock in the Evening, to deliver Lime; and it is particularly requested that no Person will apply for Lime except within those hours, as none will on any Account be delivered.

As the collecting the Money at Christmas, from such as are disposed to take the Credit, is frequently attended with great Expence[sic], from the Distance of their Residence, and not meeting with them at Home, it is requested that all who take the Credit will be so obliging as to call and discharge their Accounts at that Time.

Coddington sits on the eastern edge of Newark's Beacon Hill.  The hill's western slope was also the site of Camerata's Gypsum Quarry and Brickworks.  Trade directories describe our soil as clayey to the west and gravelly to the east; the subsoil being blue lias (lime)stone, marl and gravel.

Also, there is specific reference widow Ann BLACKBOURN who is contuning the business of quarrying in Coddington in 1830:

Ann BLACKBOURN returns her sincere thanks to her numerous friends for the liberal support she has received from them since the death of her Husband; and hopes, by keeping a good article, to merit a continuance of their support. 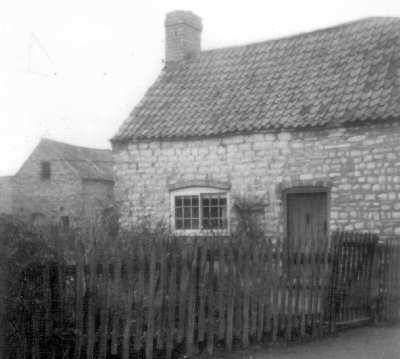 We have a reference to historic stone quarrying in Coddington that says the masonry of Newark and Sleaford Castles contain some Coddington stone.  However, we need to look for evidence to corroborate this - the 1945 article is quite lighthearted (and also says that a skeleton of a 'saurian monster' was found at Coddington quarries).

" … it is certain that some time after the Bishops of Lincoln recovered their (Newark) Castle in the thirteenth century, building on an extensive scale was again begun on it.  Bishop ALEXANDER's materials seems to have been chiefly lias limestone rubble, or rag-stone, probably got from the adjacent parish of Coddington, with quoins, facings, and ashlar work generally of Ancaster or Haydor oolite, doubtless from the same quarries from which he built his castle at Sleaford."
When William PHILIPOT founded his Newark Almshouse Charity in 1566 he stipulated: "that its pavage be not made with any stones from Beacon Hill but only such stones as lie under the {-} of stone now commonly used or else such other blue stone as is gotten in Coddington Field".

One of Coddington's four open fields was called "Stonepit Field" in the 1760 Enclosure Act.  Three Lime pits are marked on Sanderson's 1835 Map (20 Miles around Mansfield). They were:

Two groups of lime kilns were marked on Beacon Hill - one off Has(l)ock Lane.  According to the 1907 book 'A History of Newark' by Cornelius BROWN, the Chapel on King's Street Newark (now Staythorpe Social Club) is built with Coddington stone.

'Clay wall' on Chapel Lane, a wall from a now derelict farmbuilding of Charity Farm is built from limestone.  Perhaps it was called that because limestone was used for marling the claylands.

The buildings in the village are now almost entirely brick-built, but several have limestone foundations or remnants of limestone masonry (for example Sunnyside Farm and the cottage that became Manor Dairy Farmhouse).  Stone foundations (often a few feet high) were frequently used for timber framed buildings to prevent rotting of the wall plates  through direct contact with the soil. 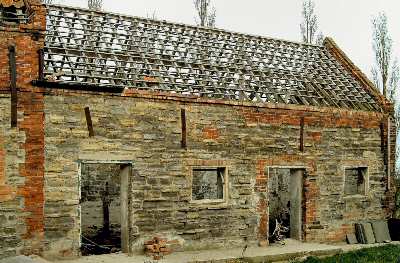 Hilltop Farm barns (on Balderton Lane) are stone and brick.

Hall farmhouse (which once stood on Main Street, next to the Inn on the Green) and several cottages (including two near the mill on Balderton Lane) were largely built of Coddington stone, but are now demolished.

Good sized similar stone walls can be seen at Newark Friary.  Intriguingly, Balderton now has many more stone buildings remaining than Coddington does.

In the past, local flooring was often made of reeds and plaster aggregate.

Limestone was used for mortar and rendering, and burnt for quicklime - which when added slowly to water produces a slurry of slaked lime, used in whitewash.  The reaction between quicklime and water is quite violent and produces a lot of heat.

From the 1500s lime also began to be used in agriculture to improve the fertility of clay soils.

These people are listed as limeburners.  They may be the owners of the kilns rather than workers, and they often did other things too, like farming or shop-keeping.

In 1912 Mrs Sarah YOUNG is a farmer and Joseph Richard YOUNG a beer retailer, but there are no limeburners listed.

In 1916 Directory no YOUNGs or lime workers are included.

The YOUNG family were gentleman farmers associated with Sunnyside Farm.  Sunnyside Farmhouse, on Main Street is next to Manor Farm in the centre of the village.  It has a large, apparently early-Victorian, brick frontage with older range and original brick and pantile farm buildings behind.