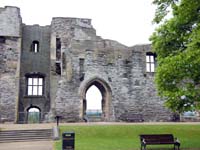 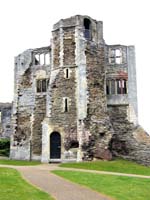 This book is a record of some of the buildings partly or wholly constructed using 'Coddington stone' more properly called lias limestone which was quarried from a belt of limestone which runs roughly NE to SW of this area.

The roughest of the stone not fit for building gave employment to Lime Burners. 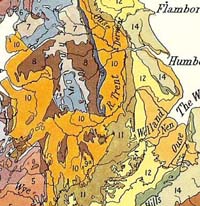 The stone is Lias limestone sometimes referred to as 'ragstone' and in Kent is called 'Kentish stone'. It is a fairly common cheap general purpose stone but does not wear as well as other stones. Its colour changes over time from golden yellow with crisp edges to grey with soft rounded edges. It tends to be used in walls that are cornered by better quality stone.

The Geology of Coddington

The best way to consider the rocks which underlie Coddington is in terms of a layer cake. There are layers of limestone, sandstone and clays all deposited one on top of the other over millions of years and the specific type of rock that was laid down depends on the local conditions at the time – most importantly how deep the water was and how far away the land was.

If the water was deep and land far away then we tend to get claystones laid down. If the water was shallower and warmer then we get limestones. And if there was a landmass nearby with great rivers carrying vast amounts of sand and silts with them, then we tend to get the sandstones such as are deposited today in the Mississippi delta. Occasionally the sea might retreat completely and we can get great thicknesses of desert sands. All these rock types are represented in the local area.

All of these layers were originally deposited horizontally but earth movements in the millions of years since then have tilted the rocks so that today in the Newark area they have a shallow dip (a slope) towards the east. This is reflected in the landscape and is noticeable if walking or riding between Newark and Coddington where, once the top of Beacon Heights has been surmounted, the land slopes away very gently towards the east.

This means that when the ground surface is eroded away over the millennia, the layer cake is exposed with the oldest (lowest) rocks being seen in the west of the district and the youngest towards the east. Since some rocks are harder than others this also means that ridges are formed where a harder rock resist erosion whilst the softer rocks are washed or ground away.

This is in part how Beacon Hill is formed and is also the reason for the Lincolnshire Edge further to the East around Leadenham.

The rocks of the Trent valley around Newark are of Triassic age – they consist mainly of red and grey marls – calcareous mudstones – interbedded with evaporites like gypsum. They date from between 228 and 216 MYA.

Overlying these Triassic rocks and forming the escarpment at Beacon Heights are the rocks of the uppermost Triassic and the Lower Lias. These date from around 216MYA to about 190MYA and consist of interbedded limestones and claystones. They include bone beds which are rich in vertebrate fossils but are difficult to locate.

The limestones themselves are very argillaceous (containing a high concentration of clays) which tends to make them relatively weak and prone to decay when exposed to moderate weathering – in particular slightly acidic rain. In spite of this they were, in the past, quarried both on the Beacon Heights escarpment and on the dip slope approaching Coddington and have been used in buildings in the area. They were also burnt in kilns for making lime.

Other products coming from the quarries along the edge included gypsum and clay for bricks. However the latter were relatively short lived as the presence of particles of gypsum in the brick clay meant that they were prone to cracking when fired. 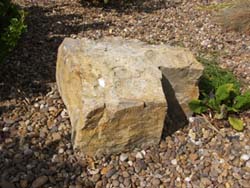 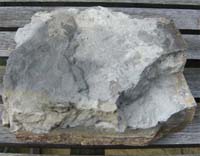 Examples of stone dug up during the building of Thorpe Oaks showing the colour before exposure to light and after only 5 years in the light.

As in most quarrying there is a lot of small stuff that is useless for building purposes. This is not wasted and from the start a lime burning trade began in the village.

Lime burning is a highly hazardous venture beginning by literally burning the stone which is then immersed in water. The chemical reaction creates heat and the water boils violently.

The end result is lime mortar for building and fertilizer for farming.

Numerous buildings within a 12 mile radius of Coddington have been built. The 12 miles is an indication of the transport system which relied on horse drawn carts, that distance was a day's work.

The Castle in Newark is the biggest example of the use of the stone and in Thomas Blagg's book 'Antiquities of Newark' it is recorded that Alexander, Bishop of Lincoln was given permission to rebuild the castle in 1325 and the stone was brought from 'the adjacent parish of Coddington'.

Sleaford Castle was built by Alexander du Blois, Bishop of Lincoln between 1123 - 1147 it was quadrilateral as was Newark with square towers and keep. It is thought to be more residential and crop storage than defensive. It fell into decline caused by the removal of timber and the lead roof during the 16th century. [ Wikipedia]

Many buildings have disappeared over time but many survived. Mostly churches have survived but there are examples of houses, dovecotes and the Holes Brewery building the biggest. 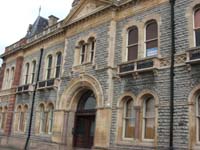 There are incomplete remains of the town walls to be seen. 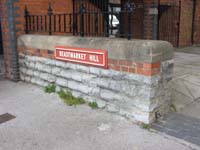 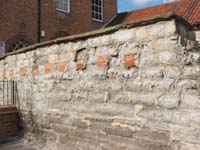 Other walls in town are 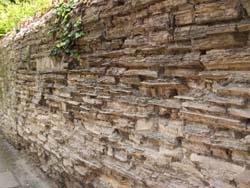 Pillars are all that's left [opposite the 'Barge'] 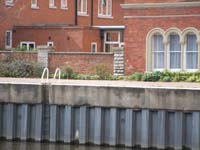 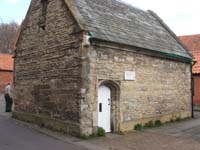 A fine house example is 'The Chestnuts' on North Gate 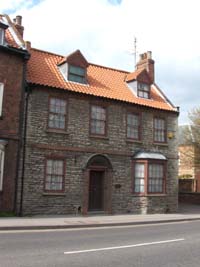 Without doubt one of the best examples must be The Friary between Appleton Gate and Friary Road. 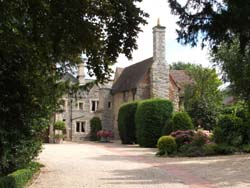 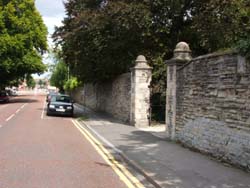 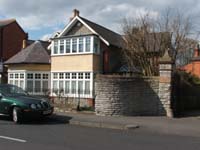 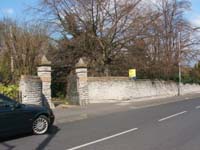 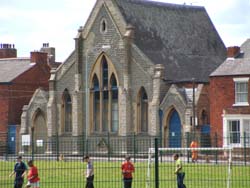 The Governors House ['Greggs' the bakers] 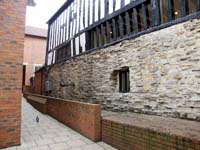 Churches in the area that used the stone include Coddington which, when renovated in 1865, the tower was clad in a finer stone and the Coddington stone was completely hidden. However, inside the tower in can still be seen.

Church towers that the stone can be seen are 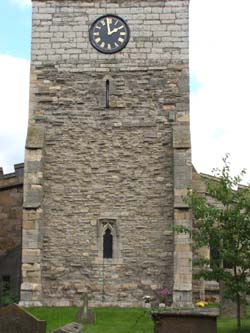 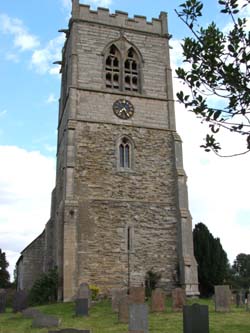 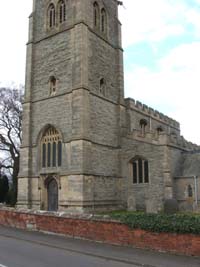 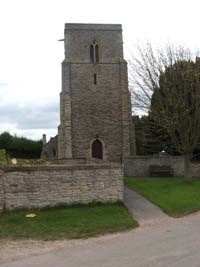 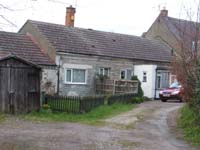 In Coddington there are examples in Chapel Lane   and at Hill Top, Balderton Lane. 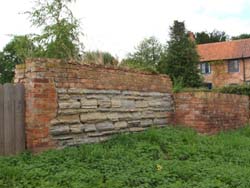 During the renovation certain walls were taken down and when rebuilt the 'hidden stone was turned to show its original colour.

Buildings  have gone for ever One is the cottage behind the windmill on Balderton Lane. 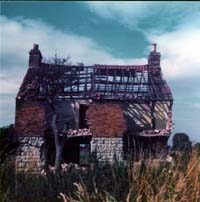 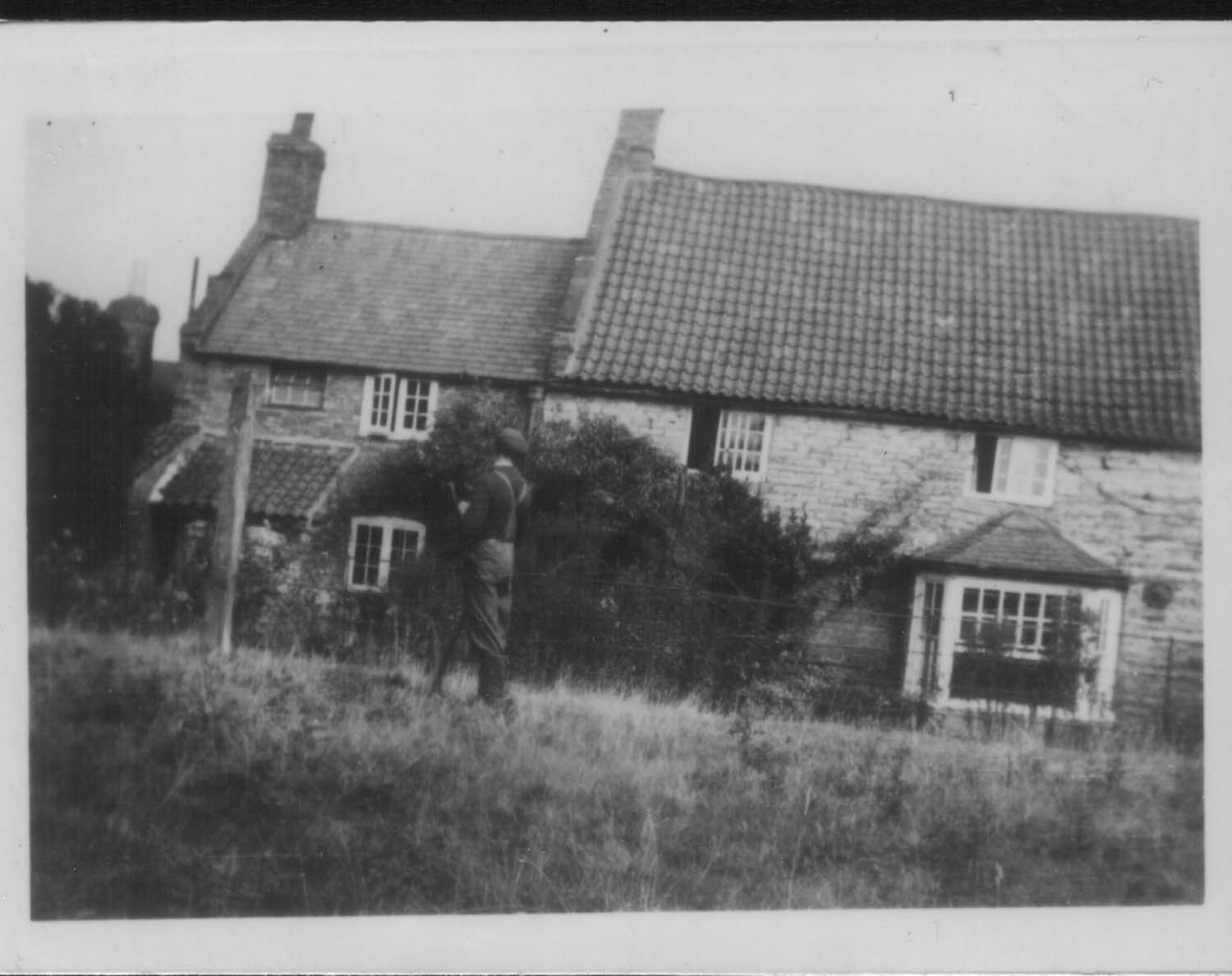 One of the quarries laid along the side of the C208 close to the A1 south slip road. 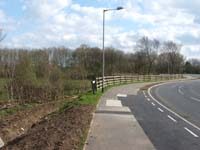 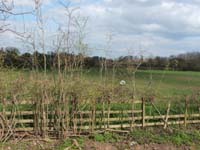 There are many more buildings that still stand and perhaps, while touring around the area as far north as Moorhouse and west to Sibthorpe, you may come across others.

Remember that the men who dug this out of the ground, were possibly also Lime burners, and probably didn't live very long unless they were very careful or very lucky!

There follows a section of photographs of other buildings which have the stone in them. 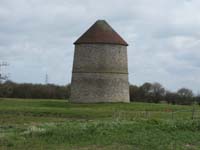 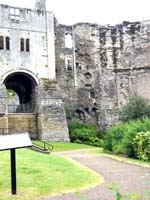 This section is by no means complete and will be added to as time, or I, go by!!