These notes were written by Major Godfrey TALLENTS (senior partner in Tallents solicitors) jotted on the back of various letters from: - Coddington Horticultural Show dated 23rd July 1900 and Ryders P.P. Seeds acknowledgement dated Season 1902 – transcribed for CHG by Fred REED.

“The living is a Vicarage, the net yearly value £290 in the gift of the Bishop of Southwell, and held by the Rev Charles Penswick SMITH, A.K.C Loud Sim about 1891.  The Vicarage is a new building built about 1872 on the Newark Road - well stocked with trees, large garden and a good grass field.

The Feast is held on the 12th day of November where the Post Office is now - it was once a Public House.

The Hill has been lowered all along the road, as can be seen all the length of the wall belong to Mr TALLENTS, but cannot find out the date when it was done.

Beacon Hill was lowered in the year 1827; most likely Coddington Hill was done at the same time.

There used to be a statute held here in May for one day but it died away some 50 years ago.  I am told by an old inhabitant, there used to be Tom Fool shows and a lot of stalls, this was held where the guide post now stands, and stalls by the side of the road on Bunkers Hill, opposite, my informant tells me there used to be a lot of drinking.  Also a lot of fighting, which used to take place in the first field now occupied by Mr. PARKES.  On these occasions the Constable had plenty of work.  Also wrestling at the Plough Inn paddock.

Thornton says there used to be a famous horse race held here on the Moor, Stapleford Lane End of which the Mayor of Newark and Alderman of Newark were accustomed to provide the plate.  But got down to Donkey races about 1862 to 1870. p.s. the Mayor and Corporation used to attend the races in state.

A reading room was erected by the late Col. James THORPE and there is a village library of about 100 vols.  Supported by the Esquire, aided by a bequest from the late Mrs DEEPING of Newark.

The Wesleyan and Methodists have a place of worship here erected in 1865 with schoolroom adjoining, for 130 children the school received £20:00 per quarter from Birches Charity, now closed but used as a Sunday school.

The soil is clayey to the west and gravely to the east, subsoil, blue lias stone, marl and gravel.  The area is 1,900 acres, rateable value £2,674.  Population 500-600.  Crops grown chiefly corn & roots.  There is a Post Office and telephone to Newark.

Mr. James THORPE, the elder, of Beaconfield Hall (since called Coddington Hall) was twice Mayor of Newark in 1832 and 1835; his too early death was a signal loss to the town.

It received its name from the fact; a Coddington man stole some ducks, and was found in this lane pulling out some feathers, when alive.  This man Robert TOWN lived in a house now pulled down facing WALSTER’s stack yard as was occupied by Mr. S. PARKES as a gardener for years, which belonged to the late G. ORDOYNO.  The late Colonel THORPE bought ORDOYNO’s farm and house which he had pulled down and built a nice house for his mother, it now belongs to Mrs TALLENTS and when it was taken over PARKES’ garden was enclosed as a part of the plan.

This Robert TOWN was a man very fond of beer and was such a glutton; he would drink half a gallon at a time, and not being very fond of work, what money he could get was spent in drink.

Coddington Cross stood where the guide post now stands, the remains of the Cross was taken down about ???.  Some of its stones are still about the village.  The stone at the stocks is one, two large steps at the lace cottages, and at Mr. ROSS' corner, we find some more with ends stuck in the ground, there was a large round stone, no doubt got used for some purpose and out of sight, with others.

The mention of the Cross - in history have I found:  p.s. the old Cross was standing after 1811. 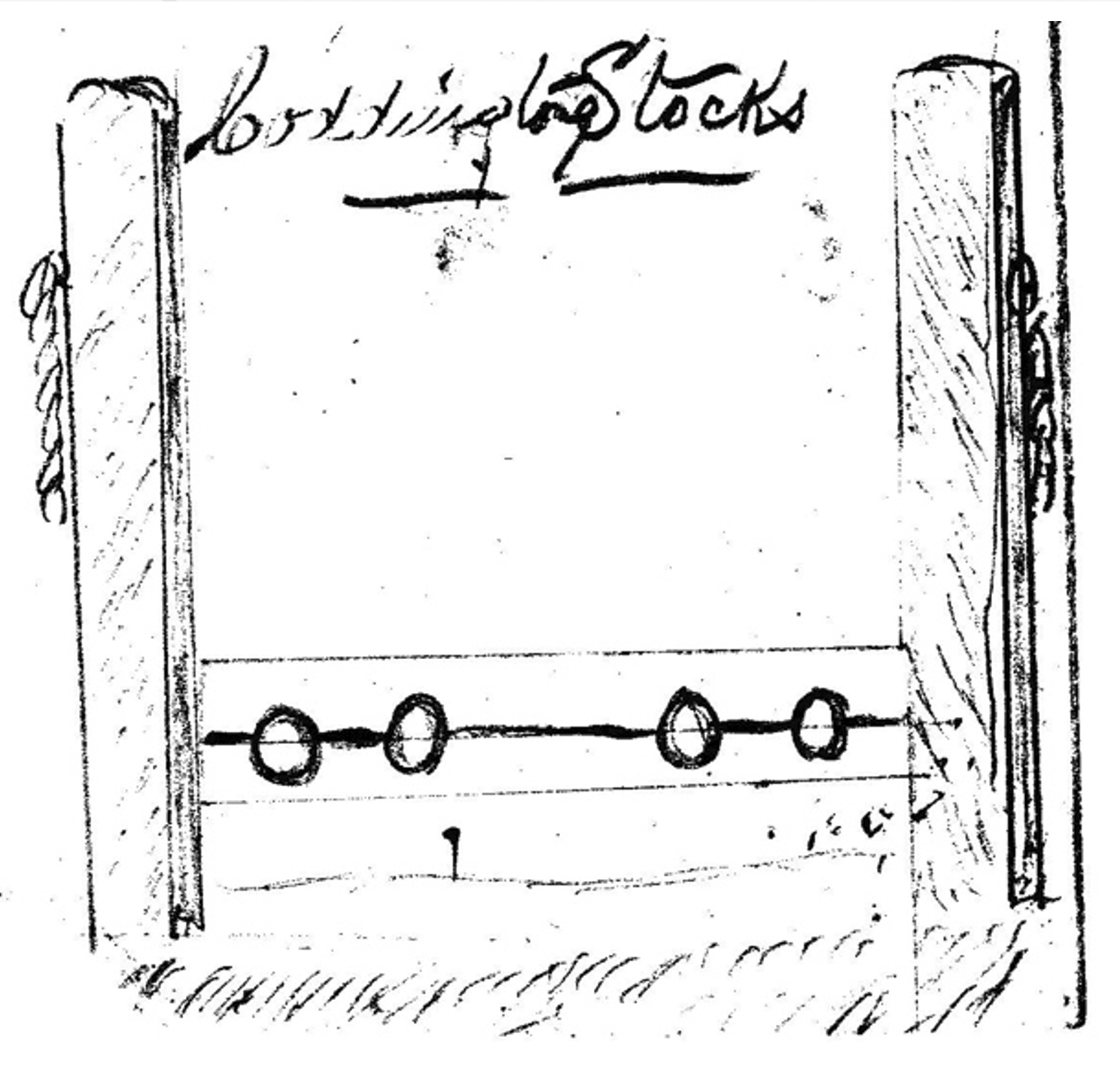 The old Stocks at Coddington were in the pinfold and situated by the side of the road on the turn to Beckingham. Now nothing remains of this public punishment of by gone days, but the grass on which children now play, a post and a large stone, to mark the spot.  The size of the stocks, would hold two prisoners, there was also chains fastened to the posts, for the parish Constable to handcuff prisoners too.

In 1840 or about new-posts were erected, and in the following night sawn down by some one unseen, but it was supposed, the work was done by one Harry BURTON a joiner of this village a notorious person, who lived in the house now occupied by village police man.  The Stocks had Bow staples with locks hands across.

Coddington Hall is this residence of Capt. J.S.THORPE JP is pleasantly situated, over looking a large Park well stocked with a fine heard of Red cattle, the gardens are very nice but not large, the pleasure gardens have been recently improved and enlarged with a fine fountain and laid out after the Italian style. Capt. THORPE is the Esquire of Coddington, and also lay Rector of the church (by the farm now in occupation Mr C DAYBELL which is called the Rectory farm and is the property of the Captain) to keep the fabric in good order in the chancel.

The Duke of Newcastle is Lord of the manor.

The principal landowners are Capt. J S THORPE J P. who is the owner of nearly the whole of the Parish and Mrs YOUNG who owns her own farm and some cottages together with a shop also the Public House known by the Plough Inn.

The lime quarries also are on her land and have produced some very fine limestone for building purpose and the other kinds are burnt and produce very good lime for making mortar.  The Kiln is not in use now, the stone contains some fine Specimens (????) of fossils both ???? and ???? also specimens of the S???? been found.

The large room over the three cottages next to the Globe Inn originally used as work rooms for making of lace, but which kind of lace I am unable to make out, from what I can gather from an old inhabitant it would be about 1836 when the making of lace was discontinued, the proprietor was named ASHFIELD, and was built by him.  Thornton says.  The Lordship is in several hands, two brothers of the name of ASHFIELD, have each portions.  One, a Dr. ASHFIELD, lived at Waddington, the farm generally known as Manfleets farm and the one Mrs MORRIS resides did belong to the ASHFIELDs, and descendants of the same family are still in Nottingham, no doubt they might have been a Nottingham family, hence lace making.  The ASHFIELDs were liming men at their time - see grave stones dates back to 1677 & before.

In Balderton Lane on the right-hand side before you reach the gravel pit you will see the old trenches used by the troops against Newark Jan 1st 1644.

March 21st 1643 Prince Rupert being a nephew of King Charles marched from Coddington with an army down Beacon Hill a mile short of Newark and fought a victorious battle with the enemy.

Bovate = as much land as an ox could till in a year.

Carucat = as much land as might be tilled by one plough.

14 Carucates of land equal to about 1,700 acres (lat) Ploughlands

Obit = a solemn office for the dead