The journey of the BIRKETT Family from Balderton to Coddington, then to Norwell and on to Nottingham

Samuel BIRKETT married Elizabeth DOUBLEDAY at Balderton on 1st May 1671.  His probable parents were Richard BIRKET, of Newark-on-Trent, yeoman, & Margaret GRUBB, (“the natural & lawful dau. of Willm. GRUBB, of Balderton, yeoman”), who were married 26th Apr 1626 at East Stoke (next-Newark).

During his life, Samuel was a churchwarden at St Giles, Balderton and was buried in the churchyard on 16thJan 1677.  His wife, Elizabeth was buried there too on 30th Sep 1699.  In their lifetime they had two known children; Richard (baptized 6th Feb 1671) and Anne (baptized 16th Nov 1673).

This period is notable for when the BIRKETTs were substantial landowners and there are numerous land/mortgage transactions recorded in the Nottinghamshire County Archives relating to Newark, Balderton, Coddington and Barnby-in-the-Willows.

Anne married John ARNOLD (of Staythorpe, yeoman) at Balderton on 6th Nov 1698.  Richard married Elizabeth TAYLOR in Kilverton on 27th Dec 1697 and their marriage lasted 63 years.  During this time they had twelve children.  Elizabeth was the daughter of Thomas TAYLOR and Mary (née BELL) of Coddington and Richard is recorded as “Gent of Coddington” when he takes on Robert HERON (son of John HERON of Newark) as apprentice on 24th Jan 1715.

Richard and Elizabeth’s eldest son, William, was baptized at Balderton 30th Oct 1698 and later he married Elizabeth SQUIRE (as “the Widow LANGLEY”) there on 21st Jul 1730.

Both sons had farms in Coddington that they inherited from their father.  Each of their field freeholds were confirmed in the 1762 Enclosure Act awards for Coddington. 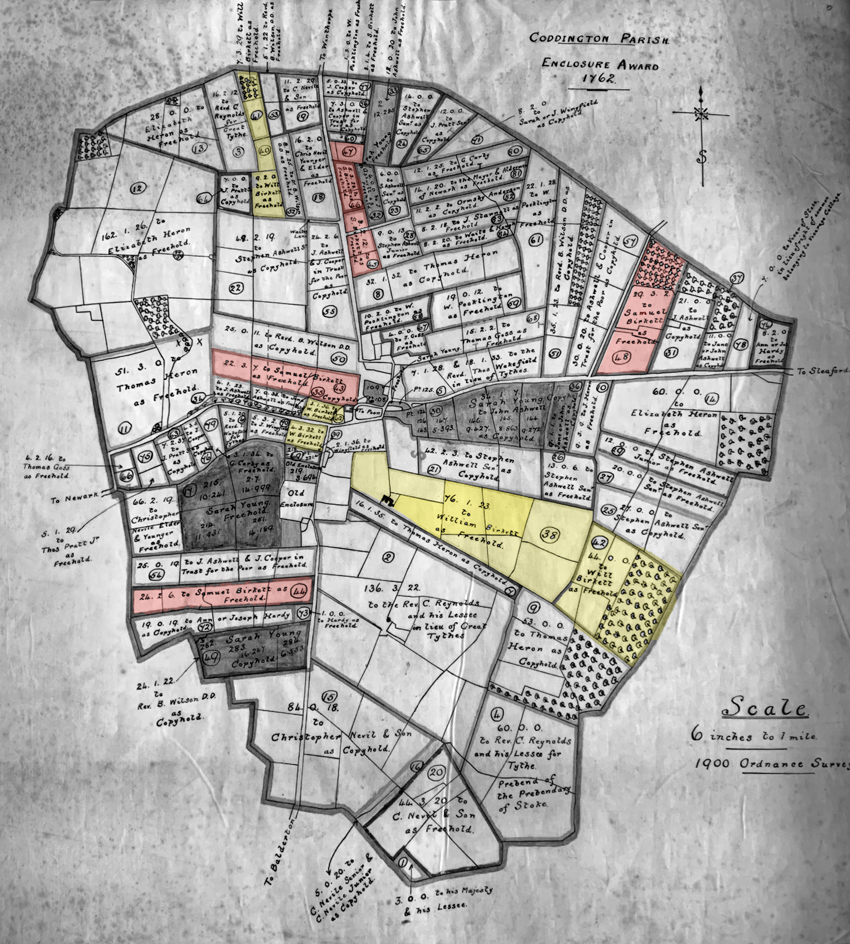 William married Charlotte JOHNSON on 17th Aug 1752 at St Wilfrid Church, North Muskham.  They had seven children before William died, age 42 on 8thJan 1774.  He was buried in Coddington churchyard on 10th Jan 1774 and his headstone still stands just along from the church porch.  His widow, Charlotte subsequently married Joseph BRANSTON at Coddington on 2nd Feb 1775 and they had a daughter, Catherine, who sadly died in her first few months in 1777.

At the age of 22, Samuel Jun married Francis WARD on the 25th Dec 1788 at Saint Mary‘s Church, Newark and went to live at Coddington.  They had seven children but Francis died soon after the birth of the last child, Edward (b. 10th Mar 1799).  She was buried on the 30th Mar 1799 at Coddington and headstone is now laid flat on the north-side of the churchyard, on the boundary with Chapel Lane. 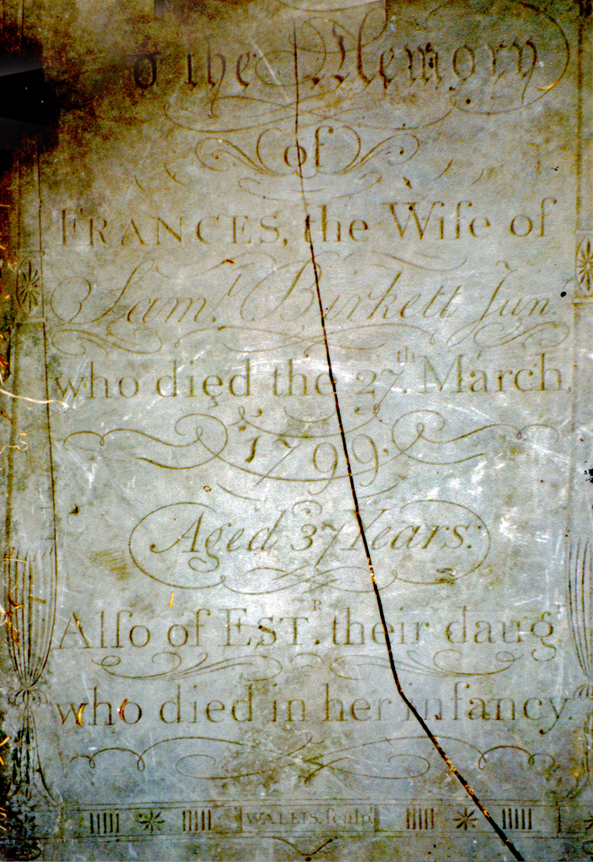 Following his death, Samuel Snr was buried on the 18th Mar 1806.   In his Will he left Samuel Jun a fourth part of his estate, to be paid after the death of Samuel Jnr’s mother, Elizabeth.

In 1807 Samuel borrowed £917 9s 0d from Welby & Co bank of Newark, likely to fund the purchase of the Masons Arms  public house in Glasshouse Lane in Nottingham.

Things didn’t work out well and in 1809 Samuel suffered debt proceedings by his creditors, some 14 in all, to the sum of £1,313 2s 11d.  He had to sell the Masons Arms and stock and forfeit monies from the sale of his late father’s property in Coddington following his mother‘s death.

Samuel then married Mary COOPER, daughter of William COOPER of Coddington, on the 9th Sep 1810 at Saint Mary‘s Church in Nottingham.

They then returned to live in Coddington as farmers (Samuel by now aged 44 years).

Samuel died on the 24th Dec and was buried on the 27th Dec 1831 at Coddington aged 65 years.  Sometime after this Mary took the children to Norwell and became the keeper of the Black Horse public house there where she remained untill she died in 1856.  John Cooper BIRKETT maintained The Plough in Coddington.

On her death she was returned to Coddington to be buried on the 7th Dec 1856, aged 72 years.  Her son, Samuel Frederick then took over the Black Horse  pub in Norwell.  He married Ann CLARKE of Norwell, daughter of George CLARKE, farmer on 10th Feb 1857 in St. Lawrence church.

They had a son, Frederick BIRKETT baptized on the 8th Feb 1861, again at Norwell.  Also a second son, baptized Herbert BIRKETT, on 31st May 1864.

Sometime after this Samuel took Frederick to live in Nottingham where the boy took an apprenticeship and became a joiner.  Much of his work was for the Nottingham Corporation.